You are here: Home › Perry’s Lookdown to Newnes

Returned to Katoomba early for supplies. Raman had lost his little air pillow at the Marrickville house, it seems, so he grabbed another. We found the Katoomba food co-op and stocked up. I sent a 3.3kg on to Brisbane of things I think I can do without. And Raman found my Key in his duffle bag, now I have two spares.

Having met a few fellow adventure riders and picked their brains we had a few good hints for places in the mountains north of Katoomba.

On our way out Katoomba we stopped in at Govett’s Leap. What a landscape this is! Govett’s caught in the wind…leaping perhaps The ranges and mountains are definitely blue, weather they are any more blue than else where I am not sure.

After lapping up the view over lunch at Govett’s, we headed toward Newnes. On our way we came across Black Fellows Hand rocks. 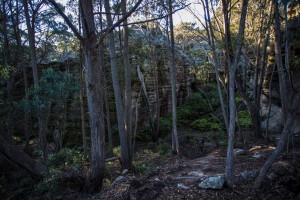 We headed for Newnes. What a spectacular Valley! Cliffs tower on each side, clearly defining the valley. Newnes it self, now in a national park, was a hub of activity in the mid 1910’s as a shale oil mine and refinery although this history wasn’t what took my breath away initially, rather the afore mention towering cliffs.

After setting up, sun down and dinner, I headed off to get a few photographs. I wanted to get above the mist layer that had formed on dusk. 5D, tripod and 17-40 in hand I began climbing, with only the light of my head torch. I followed the first ridge I found. It got very steep very quickly but still trees obscured my view of the valley and the adjacent cliffs. Eventually I reached the base of the cliffs. Disappearing into the gloom above me, the rock face seemed massive. I found I had my phone in my pocket so I consulted the contour map and decided to head east in the hope of finding a way up the cliff for the view over the tree tops.

I spent the next hour scrambling along in the dark and found some amazing spots. Trying to photograph some, only to find my lens was fogging up from the cold that was now deeply chilling. Closer to zero than ten for certain. Eventually my camera equalised enough that it stopped fogging up. The tower walls above Newnes The view I was trying to get above the trees for

I never did find a way up. The towering walls of stone were impassable, at least to me in the dark with a tripod and camera slung over my back. I did make a few attempts to climb the rock faces that in several places had fantastic hand and foot holds but I soon decided against the idea when one of these fantastically shaped and grippy hand holds broke clean off! Much of this sand stone is from a course sand up to a few millimetres in diameter, yielded fantastic grip to shoes and hands but the structural integrity is poor. Looking again at my phone I could see that I was nearly three hundred metres above the valley floor!

When I stumbled back into camp at 11:40pm over two and a half hours had passed.

2 Responses to Perry’s Lookdown to Newnes