You are here: Home › Brisbane

Our time here in Brisbane has been focused on servicing the motorcycles. Sunken Miles are tough going and maintenance is an important part of the experience.
I do as much of my servicing as possible. One of my aims of this trip and generally motorcycle touring is to learn the ways of the four stroke engine and become at home with its workings. By learning through my interest in seeing Australia I keep the process enjoyable. I had little knowledge of the inner workings of a four stroke engine and even less so the confidence to get in there. Choosing to own a simple single cylinder motorcycle was a conscious decision to improve my mechanical skills. I bought a workshop manual and, apart from the 1000km service, I have done all the servicing. Mawson now has over 36,000km on the clock.

From time to time I think it is good to have a specialised mechanic look over the bike to check I haven’t missed anything.

Two main items presented them selves for getting some help with.

The first, surging at highway speeds that developed since the deep river crossings (not sure if there is a correlation). The second, significant engine vibration above 4500rpm. The latter I just assumed was what the ol beast was like until I rode Jackson’s 2009 KLR. Jackson is Sleepy John’s son who has recently returned from 14 months touring Europe on a motorcycle(not the KLR).
Both Jackson’s KLR and Gregor’s 1990 KLR Tengai (the one Vince rode) run significantly more smoothly all the way to red line at 7500rpm. Mine has been the way it is since I bought it.

I fully disassembling my carb to see if I could find any issues. There was some junk in there although not much. Not wanting to prolong our time in the city, I booked it in with TeamMoto Kawasaki here in Brisbane for a carb tune. The mechanic had suggested this could well we the cause of the excessive vibration. I did the usual forum research and turned up a few things that we checked when working on the carb, like engine mount bolts. The bike ran as well as it ever has after my carb clean but I still wanted to chase up the vibration issue that hadn’t changed.

Alex from TeamMoto Kawasaki was great to work with, stuck to his quote, worked through a hiccup to get the bike back to me ASAP and to my surprise the bike runs like jackson’s KLR now, with minimal vibration. Thanks Alex and team.
The rejetting has also given the bike a little more power. I am keen to see if it has affected fuel economy. I am hoping it won’t have changed it much as the main jet only acts in the top 1/4 of the throttle range. Hence I hope it gives more power when needed but doesn’t affect the fuel consumption when taking it easy which is most of our riding. To the chagrin of some motorists, we tend not to do more than 80km/h. This tends to save about 25% on my fuel consumption over sticking to the 100km/h speed limit.
I keep records of every tank of fuel and the associated fuel economy figures. I intended to put these up here at some point. I am also logging expenses and have a full breakdown for those interested. Here’s a rough sneak peak though. I am averaging about 4.5L/100km and daily costs running a little under $60.

He is happy to have his steed back.

Both Raman and I have had some, er… panel beating to do on our panniers. We are both really grateful to John and his wife Nancy for sharing their home and business workshop. Thanks so much John and Nancy 🙂 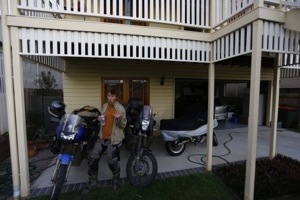 Raman thrilled to have arrived in Brisbane at John & Nanacy’s

A day ride back up Mt Mee area with Jackson, his mate on an ol Honda SL250, Raman and I Raman outside Sleepy John’s workshop. We both admired the well set up Suzuki DR650 and the BMW1200GS

I couldn’t come through Brisbane without visiting my friend, Jesse Hunter, founder and manager of CameraPro.
Thanks for putting us up Jesse and Jancy.

I met Jesse some years ago in the hunt for reasonably priced but legitimately sourced photographic equipment. It’s been great to see how he has shaped his business and the team he has put together. Congratulations on your recent listing in Business Review Weekly as the fastest growing retailer in QLD among other distinctions.

I highly recommend CameraPro to professionals and beginners in photography alike. I have never been supported or sponsored in any way by CameraPro.

We are almost ready to leave the metropolis and then Oli goes and gets sick. Damn!
Its taking a bit longer to get better than I had hoped so we decided that Raman might as well head off up the Sunny Coast for a bit.
It’ll do us good to have a mid trip break anyway. All has been going well between us and I’ll catch him sometime soon.
I feel excited to have some solo miles ahead too, even if only briefly.

So for now, I am resting up in shelter and comfort waiting for this dratted flu or what ever it is to pass.

I am much better after a good bit of rest. Thanks for all the get well comments, I’m working on it 🙂

As it happens I think Raman is getting his turn now. He’s up the coast a little way, taking it easy I gather.

Thornton to Brisbane
Brisbane to Kenilworth