You are here: Home › Warrambungle NP

Cooked breakfast in the rain this morning. Rain on your toast isn’t that great. The scramble eggs were good but yeah, the wet toast…

Rain pattering down on my tent. Waiting for the weather to ease. The One Planet Goonie 2 30D tent is working well. I have my sleeping mat and bag rolled up inside it. Thanks Sandy for that hint 🙂

I can pitch it in under 5 minutes including inflating the EXPED SYN MAT 7.5 and using the dry sack that my cloths go in when on the bike as a pillow. Very happy with this side of things. Plenty of room for one (its a two man tent in theory). It does work for two but for living in day-in day-out it is nice to have enough space to spread out, write, stretch, toss a lens into a corner, pile stuff in when its raining etc. Raman has his one as well. Its a little on the light weight side for my liking. We’ll see how durable it is over the long run. Very happy so far though.

Went for a ride in the avo after the rain cleared up. 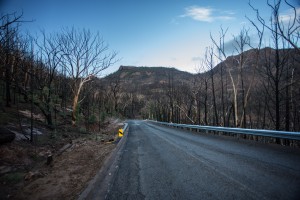 Its a bit of a moonscape in places A tower on the South-Eastern edge of the park on one of the peaks. The tower is enormous! The “little” tower to the left is a full size television repeater tower. The larger tower on the right is 155m according to my map. Not sure what it is used for. Split Rock firing up on dusk again. Would love to climb it tomorrow before sun rise. Spent an hour with the night sky this evening. It is definitely good here, the stars don’t twinkle much at all which I think is a sign that the atmosphere is more uniform in temperature variation. The main limitation in my astrophotography hasn’t been the skype though, rather my equipment. I decided to try a longer exposure this time.

I am such a perfectionist in my photography. I would usually avoid this type of image, lacking the sharpness and fidelity that I usually seek. However this “soft” image reveals some of the magical colour in our Milky Way galaxy. Amazingly the Siding Spring Observatory had mapped over 2 million galaxies some years ago. Two million. Thats not an estimate of how many are out there! Thats galaxies that have been counted and named. I feel small.

Seeing the point around which we are rotating is another curious thing revealed by these long exposure photographs.

One Response to Warrambungle NP