Went for a walk this morning toward the big falls that are a few km down stream on the Kings Plains creek. The Kings Plains area was mined for sapphires in the 70’s interestingly enough. I decided to do a crystal study. In my early 20’s I recall going out crystal studying with a man by the name of Julian Hollis. He collects zircons and studies the level of damage in the crystal structure from their natural radioactive decay to enable an age sorting that is then geographically correlated to find where the old lava flows were and when they happened. Zircons are very pretty little crystals that most people don’t notice because they tend to be about a millimetre or so across and only a few mils long. They are highly radioactive. More so than uranium I believe.

So, I decided to have a look at the little crystal world in a place that was mined for sapphires.

Crystal study. I neglected to add a “geologists pick”. The largest of these is no more than 5mm across. Ironbark and Xanthorrhoea on a rocky outcrop at Kings Plains New Eucalypts that remind me I am not at home any more despite many familiar plants.

Here on the New England table lands we are high up. Kings Plains is about 900m . There are places over 1500m close by.

Headed to Glen Inis and on toward the edge of the plateau. Boundary falls on the Gibralter range near the eastern edge of the New England plateau. 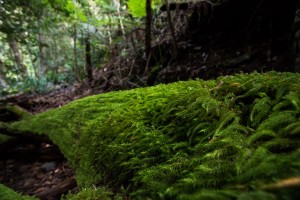 Boundary Falls, where to next?

Headed north up the range from Boundary falls to Grassy Creek where we have camped. There have been many creek crossings since Boundary falls and lots of very mushy slippery slopes. If we have to go back it will be tough going. If we come across hills as steep and slippery as we have descended that we must climb we will certainly have a challenge on our hands. I changed back to the 14 tooth counter sprocket (geared the bike down) this evening as there were a few time where I was trying to make another gear with the clutch. Raman’s gear box has 136% of the spread of mine so he isn’t needing to change sprockets. Well done Yamaha for spreading out the gear box!

We are both looking forward to tomorrows ride which will take us deep into the mountains on the Gibralter range.

We are at 990m here at Grassy Creek and its pretty cold despite how far north we are.